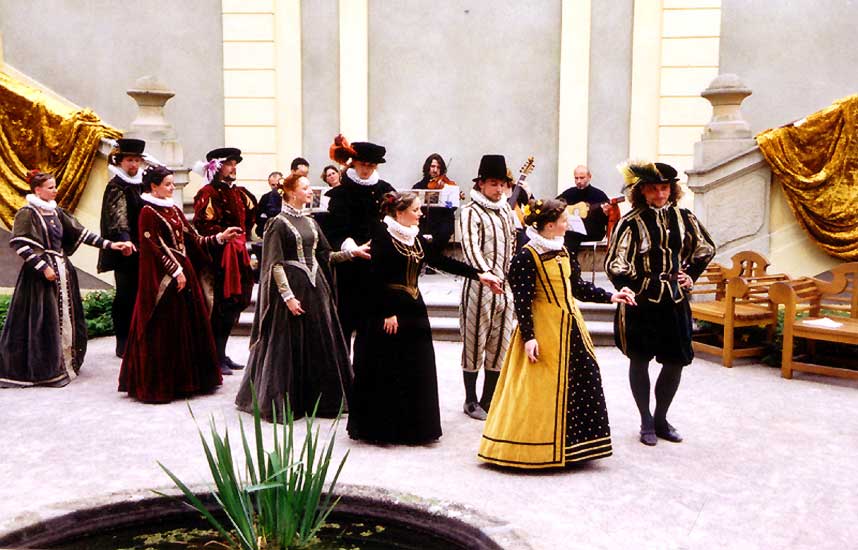 The Pavane (pavan, paven, pavin, pavian, pavine, or pavyn) is a slow, majestic, processional dance that originated in Italy around 1508, common in Europe aristocracies during the 16th and 17th centuries (Renaissance).
Contents [hide]

Until about 1650, the Pavane opened ceremonial balls and was used as a display of elegant dress. Adapted from the basse danse, an earlier court dance, the Pavane presumably traveled from Italy, originating around 1508, to France and England by way of Spain; in southern Spain it was performed in churches on solemn occasions.

The Pavane was a very solemn couples gliding dance performed with long gliding (walking) steps in procession with many curtsies, retreats and advances. The lady rested her hand on the back of the man's, with ceremonial dignity.

Spain's new fashions in dress led the way for the Pavane, and consisted of gentlemen dressed with caps and swords, Princes in their mantles, and ladies in gowns and long trains dancing with a kind of strut-like motion, resembling that of a peacock. The ladies would sweep the trains of their dresses in this dance.

The dance was very simple. The Pavane's basic movement, to music in 2/2 or 4/4 time, consisted of forward and backward steps; the dancers rose onto the balls of their feet and swayed from side to side. A column of couples circled the ballroom, and the dancers occasionally sang.

By about 1600, livelier steps like the fleuret (a brief lift of each foot before a step) made the dance less pompous.

The upper-class and nobility favored these dances at the time, which were most popular in Italy, Spain and France.

Relation to other Dances

The Passamezzo was a livelier Italian contemporary of the Pavane.

The paired dances, Pavane and Galliard, were a forerunner of the instrumental dance suites of the 17th century. Pavanes appear in a few early suites (e.g., the padouanas in some suites of Johann Hermann Schein). Later, composers occasionally used the Pavane as an instrumental piece; e.g., Fauré (Pavane for Orchestra) and Ravel (Pavane for a Dead Princess).

The costuming was of silks, satins, and rich brocade, made up after the style of the Medici days. The men were in feathered hats of the Tudor shapes, close habits, puffed breeches, and shoulder capes, with swords at their sides, as the courtiers of Queen Elizabeth's (1553-1603) Courts.

The women would wear velvet or satin trains from the shoulders attached beneath ruffs, over brocaded or satin gowns with the distinct front breadth of lace or jeweled embroidery, hoops, long pointed bodices with jeweled stomachers, and sleeves puffed from shoulder to wrist. 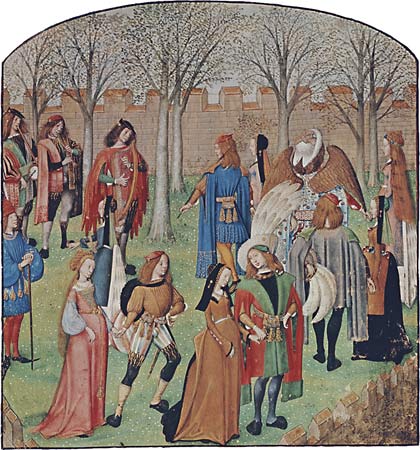 You can also search for Pavane to check for alternative titles or spellings.