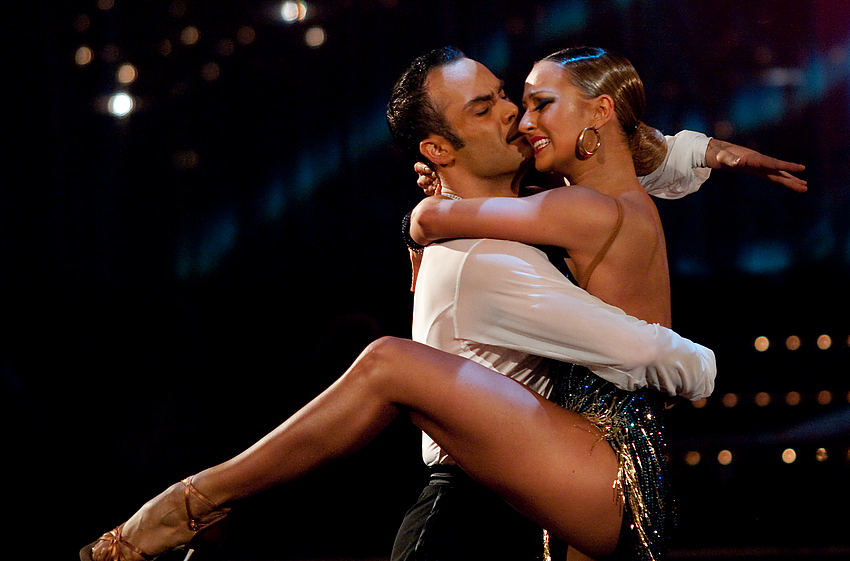 The Rumba originates back to Cuba in the late 19th century. It refers to a style of Ballroom dancing included in DanceSport categories of competition. Originally, the term Rumba was used as a synonym for the word "party" in northern Cuba.
Contents [hide]

The dance known in the United States as the Rumba is a composite of several dances popular in Cuba, including the Guaracha, the Cuban Bolero, the Cuban Son, and the Rural Rumba. All have similar rhythms that can be traced to religious and ceremonial dances of Africa. These rhythms were remembered by the earliest black people transported unwillingly to Cuba and subjected to forced labor by the Spanish colonists. The same pulsating dance rhythms may still be found in parts of Africa, but the dances have been altered by contact with other cultures and races. The Rural Rumba is a pantomimic dance originating in the rural areas. It depicts the movements of various barnyard animals in an amusing manner, and is basically an exhibition, rather than a participation dance. Both the Cuban Son and the Cuban Bolero are moderate tempo dances in traditional Ballroom form. The Guaracha is distinguished by its fast, cheerful tempo.

As early as the Second World War, the Rumba was modified to a slower and more refined version for the Cuban middle class: this was called the "Son". The American Rumba is a modified version of this dance, which first came to the country in 1913. Ten years later, band leader Emil Coleman imported Rumba musicians and dancers to New York, but no interest developed. Real interest in Latin music began at around 1929 as a result of increased American tourism to Latin America. In 1935, George Raft appeared with Carole Lombard in a movie called "Rumba" in which he played a suave dancer who wins the lady through dancing. Rumba's unique styling and unusual musical rhythms immediately captured the fancy of Ballroom Dance enthusiasts, and it has retained its popularity to the present time.

The Cuban style (International Style) Rumba is characterized by forward and backward steps. The American version (American Style) Rumba is danced in a box pattern with "Cuban motion" as it's chief characteristic. "Cuban motion" is a discreet, expressive hip motion achieved by bending and straightening the legs along with carefully timed weight changes. American Rumba is one of the most popular Ballroom dances today.

A Detailed History of Dance & Music

During the second half of the 19th century, several secular dance-oriented music styles were developed by Afro-Cuban workers in the poor neighborhoods of Havana and Matanzas. These syncretic styles would later be referred to as "Rumba", a word that also meant "party". Traditionally, the three main styles of Rumba are Yambú, Columbia and Guaguancó, each of which has a characteristic dance, rhythm and singing. Although still a purely folkloric genre, numerous innovations have been introduced in Rumba since the mid-20th century, including new styles such as Batá-Rumba and Guarapachangueo.

In Spain, the term "Rumba" was introduced in the early 20th century as "Rumba Flamenca", one of the styles of Flamenco. Flamenco itself might have had an influence on the Cuban Rumba, particularly on its vocal style. However, musicologists agree that Rumba Flamenca does not truly derive from the Cuban Rumba, but from Guaracha, a fast-paced music style from Havana.

In the late 1950's, popular artists such as Peret ("El Rey de la Rumba") and El Pescaílla developed an up-tempo style that combined elements from the Rumba Flamenca, Spanish gypsy music, and pop. This became known as Catalan Rumba (Rumba Catalana). In the 1980's, the style gained international popularity thanks to the French ensemble known as the Gipsy Kings.

In the 1990's, the term "Tecno-Rumba" was used to describe the music of Camela, and later Azúcar Moreno. Since the early 2000's, the term "Rumba" has been used in Spain to refer to derivatives of Catalan Rumba with hip-hop and rock elements, as recorded by Estopa, Huecco and Melendi.

In the late 1930's and early 1940's, a fusion of Bambuco and Afro-Cuban music was developed in Colombia by artists such as Emilio Sierra, Milciades Garavito, and Diógenes Chaves Pinzón, under the name Rumba Criolla (Creole Rumba). Rumba Criolla is classified into different regional styles such as Rumba Antioqueña and Rumba Tolimense.

In the 1930's and 1940's, Afro-Cuban Son Cubano groups such as Septeto Habanero, Trio Matamoros and Los Guaracheros de Oriente were played over Radio Congo Belge in Léopoldville (Kinshasa), gaining widespread popularity in the country during the following decades. Once local bands tried to emulate the sound of Son Cubano (incorrectly referred to as "Rumba" in Africa, despite being unrelated to the Cuban Rumba), their music became known as "Soukous", a derivative of the French word "secouer" (meaning "to shake"), or "Congolese Rumba". By the late 1960's, Soukous was an established genre in most of Central Africa. It would also impact the music of Western and Eastern Africa. Franco's OK Jazz and Le Grand Kallé's African Jazz were among the most successful Soukous ensembles of the 20th century.

In the United States, the term "Rhumba" began to be used during the 1920's to refer to Ballroom music with Afro-Cuban music rhythms. Although the correct spelling of this dance is "R-U-M-B-A", many wanted to distinguish the difference between the Ballroom Rumba and the Cuban Rumba. However, the competitive Dancesport world today uses the original "R-U-M-B-A" spelling.

This music was mostly inspired by Son Cubano, while being rhythmically and instrumentally unrelated to Cuban Rumba. By the 1930's, the genre had become highly-successful and well-defined. The Rumba that was developed in the East Coast of the United States was based on the Bolero-Son.

The first Rumba competition took place in the Savoy Ballroom in 1930.

During the 1940's and 1950's, the Mexican and American film industry expanded the cultural appropriation of the term Rumba as Rumbera films became popular. In this context, Rumberas were Cuban and Mexican divas, singers and actresses that sung Boleros and Canciones, and rarely Rumbas.

In the 1970's, with the emergence of Salsa as a popular music style and dance genre in the USA, rhythmic elements of Cuban Rumba (particularly Guaguancó) became prevalent alongside the Son Cubano. Like Salsa, Rumba would then be danced to Salsa ensembles instead of big bands. By the end of the 20th century, Rumba was also danced to pop music and jazz bands as seen on TV shows like Dancing with the Stars.

Originally, the term "Rumba" was used as a synonym for "party" in northern Cuba, and by the late 19th century, it was used to denote the complex of secular music styles known as Cuban Rumba]]. Since the early 20th century, the term has been used in different countries to refer to distinct styles of music and dance, most of which are only tangentially related to the original Cuban Rumba, if at all.

Although the term "Rhumba" began to be used by American record companies to label all kinds of Latin music between 1913 and 1915, the history of Rumba as a specific form of Ballroom music can be traced back to May of 1930, when Don Azpiazú and his Havana Casino Orchestra recorded their song "El manisero" (The Peanut Vendor) in New York. This single became a hit, becoming the first Latin song to sell 1 million copies in the United States. The song attempted to adapt the Son Cubano to the style of Ballroom music prevalent at the time in the East Coast.

Soon, Azpiazú's style was followed by other Cuban artists such as Armando Oréfiche and the Lecuona Cuban Boys, which had extensive international tours in the 1930's. Their style has been often described as "Ballroom Conga", since they used to borrow Conga rhythms in songs such as "Para Vigo me voy". This music movement, which also included many American big bands which covered Latin standards, was dubbed the "Rumba craze". Notable bandleaders of the "Rumba craze" include Xavier Cugat, Jimmy Dorsey, Nathaniel Shilkret, Leo Reisman and Enric Madriguera. Rumba was also incorporated into classical music as exemplified by symphonic pieces by composers such as George Gershwin, Harl McDonald and Morton Gould.

The kind of Rumba introduced into dance salons in America and Europe in the 1930's was characterized by variable tempo, sometimes nearly twice as fast as the modern Ballroom Rumba, which was developed as a dance in the 1940's and 1950's, when the original music movement had died down. Nonetheless, the "Rumba craze" would be the first of three Latin music crazes in the first half of the 20th century, together with the "mambo craze" and the "cha-cha craze"

Two variations of the Rumba with opposing step patterns are danced around the world. American Style Rumba was imported to America by band directors like Emil Coleman and Don Aspiazú between 1913 and 1935. The film Rumba, released in 1935, brought the style to the attention of the general public. American Style Rumba is taught in a box step, known for its slow-quick-quick pattern danced on the 1, 3, and 4 beats of 4-beat music. International Style Rumba was developed in Europe by Monsieur Pierre after he compared the established American Style with contemporary Cuban dancers. International Style is taught in a quick-quick-slow pattern danced on the 2, 3, and 4 beats of 4 beat music, similar in step and motion to the Cha Cha Cha. Both styles were canonized in 1955.

The Rumba is one of the Ballroom dances which occurs in Social Dancing and in international competitions. It is the slowest of the five competitive International Latin dances: the Paso Doble, the Samba, the Cha Cha Cha and the Jive being the others. This Ballroom Rumba was derived from a Cuban rhythm and dance called the Bolero-Son; the International Style was derived from studies of dance in Cuba in the pre-revolutionary period.

The modern International Latin dancing of the Rumba derives from studies made by dance teacher Monsieur Pierre (Pierre Zurcher-Margolle), who partnered Doris Lavelle. Pierre, then from London, visited Cuba in 1947, 1951 and 1953 to find out how and what Cubans were dancing at the time.

The International Latin Ballroom Rumba is a slower dance of about 120 beats per minute which corresponds, both in music and in dance to what the Cubans of an older generation called the Bolero-Son.

All social dances in Cuba involve a hip-sway over the standing leg and, though this is scarcely noticeable in fast Salsa, it is more pronounced in the slow Ballroom dances Rumba. In general, steps are kept compact and the dance is danced generally without any rise and fall. This style is authentic, as is the use of free arms in various figures. The basic figures derive from dance moves observed in Havana in the pre-revolutionary period, and have developed their own life since then. Competition figures are often complex, and this is where competitive dancing separates from social dances.

The American Style Rumba is commonly danced in the United States, with box-like basic figures. 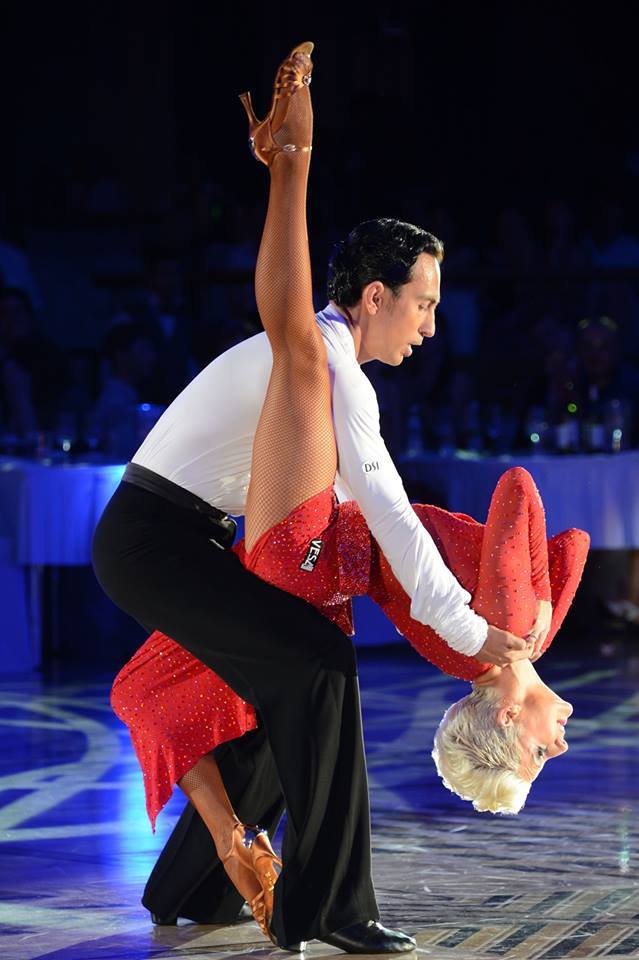 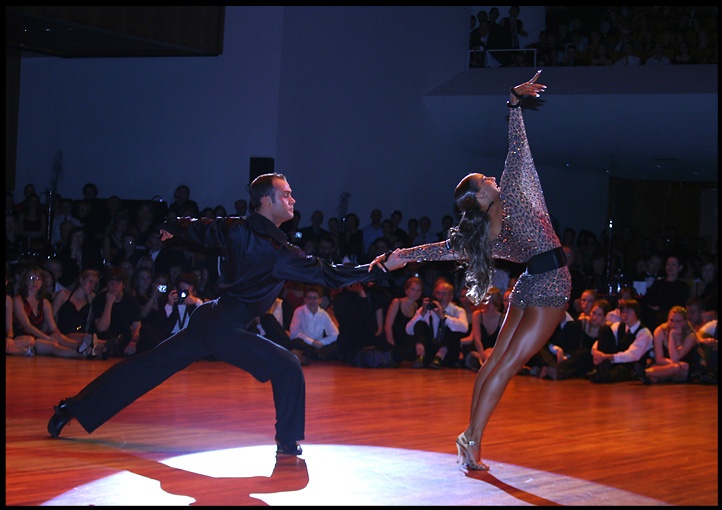 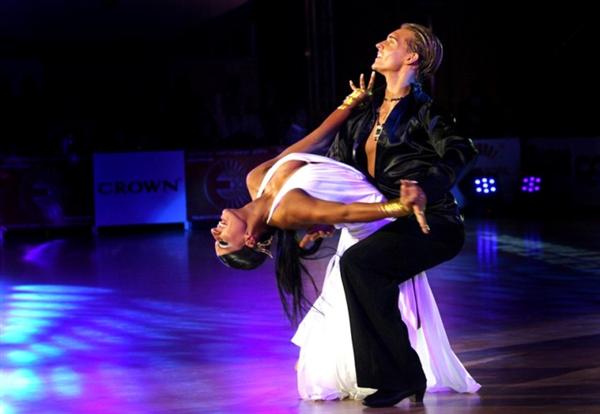 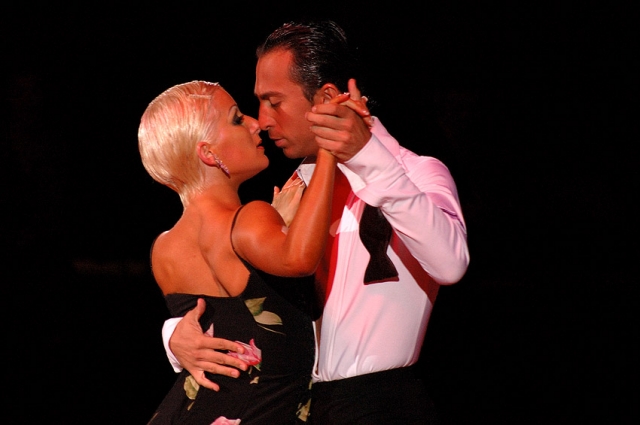 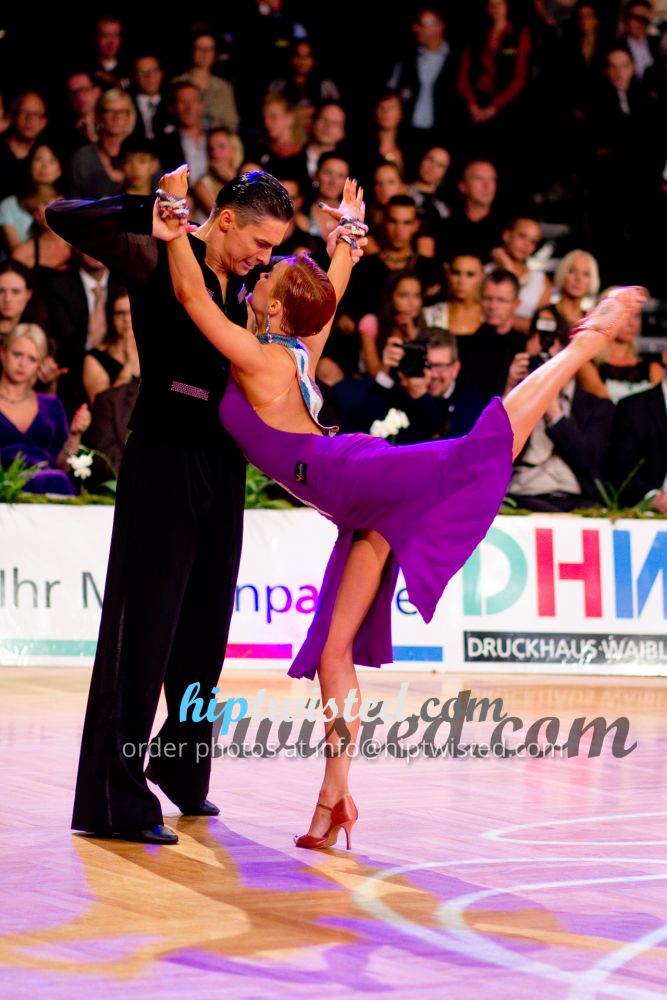 You can also search for Rumba to check for alternative titles or spellings.