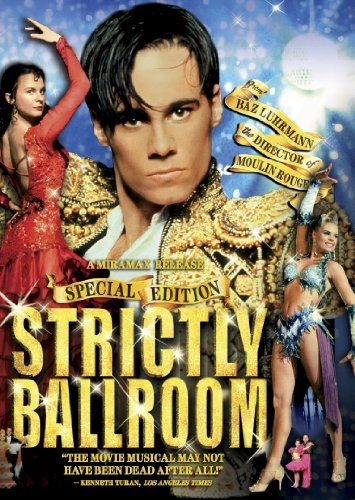 Strictly Ballroom is based on a critically acclaimed stage play originally set up in 1984 by Luhrmann and fellow students while he was studying at the National Institute of Dramatic Arts in Sydney. An expanded version of the play became a success at the Czechoslovakian Youth Drama Festival in Bratislava in 1986, and, in 1988, it made successful season at Sydney's Wharf Theatre, where it was seen by Australian music executive Ted Albert and his wife Antoinette. They both loved it, and, when Albert soon after set up the film production company M&A Productions with ex-Film Australia producer Tristram Miall, they offered Luhrmann to transform his play into a film. He agreed on the condition that he would also get to direct it.

Scott Hastings is the frustrated son of a family of ballroom dancers, who has been training since childhood. His mother Shirley teaches ballroom dancing, and his father Doug meekly handles maintenance chores at the dance studio, while secretly spending hours in a back room watching old footage of his bygone dance competitions. Scott struggles to establish his personal style of dance on his way to win the Pan-Pacific Grand Prix Dancing Championship, but his innovative and flashy steps are not considered "strictly ballroom", and as such are denounced by Australian Federation head Barry Fife.

Scott loses a competition because he started dancing his own steps, and his dancing partner Liz leaves him to team up with Ken, whose partner Pam Short has broken both her legs in a car accident (as just previously wished upon by Liz). With Scott now alone with only three weeks until the championships, Shirley Hastings and her co-instructor at the studio, Les, embark on a desperate hunt for a new partner for Scott. Meanwhile, unbeknownst to both Shirley and Les, Scott is approached by Fran, an overlooked "beginner" dancer at the studio. Scott eventually agrees to partner with Fran, intrigued by her willingness to dance "his way".

The pairing faces its first challenge when Fife, in an effort to pull Scott into line and prevent him from threatening the Dancesport status quo, arranges for Scott to become the new partner of Tina Sparkle, an established Champion dancer. When Shirley and Les hear the news, they are overjoyed; Fran, happening upon them exclaiming over their happiness about Scott's new dance partner, misunderstands initially and believes they have discovered that she and Scott have become partners. When she realises the truth, she leaves, devastated. Scott chases after her and, although she is hurt, he entices her to dance backstage with him, and her anger is forgotten. However, their dance is witnessed by several onlookers, among them Shirley and Les, who then do everything they can to persuade both Scott and Fran that the best way forward for all concerned is for Scott to forget about Fran and sign on as Tina Sparkle's partner.

Fran, accused of damaging Scott's chances, reluctantly accedes and returns home crestfallen. Scott argues with his mother, telling her and all he won't be manipulated, so won't become Tina's partner. He follows Fran home, where he is discovered and challenged by Fran's overprotective Spanish father. Scott, to appease the father, proposes that they dance a Paso Doble for the assembled company. Fran's father and grandmother demonstrate how the Paso Doble should be danced, and offer to teach the youngsters.

Fran and Scott spend the next week training, supported by her family. However, Fife intervenes, telling Scott that Scott's father, Doug, ruined his career by dancing his own steps too, which he's regretted ever since. Not wanting to cause his parents further heartache, Scott reteams with Liz to attempt win the Pan-Pacific.

The film plays with clichés and stereotypes, mocking and embracing them at the same time. Luhrmann has also commented that the film revolves around stories similar to David and Goliath, Cinderella and The Ugly Duckling. Luhrmann created Strictly Ballroom in the red curtain cinema genre which follows three rules. Firstly, the story needs to be set in a heightened creative world. Secondly it is based on a recognizable story shape, such as that of Cinderella and David and Goliath. Lastly, red curtain cinema is known as audience participation cinema in that audiences should be aware that what they are watching is not real.

The film version of Strictly Ballroom was developed from an original short play of the same name. It drew on Luhrmann's own life experience—he had studied ballroom dancing as a child and his mother worked as a ballroom dance teacher in his teens and inspired by the life of Keith Bain (who grew up in the same town as Luhrmann). While studying at NIDA in the early 1980s, Luhrmann and a group of fellow students devised a short comedy-drama set in the cutthroat world of competitive ballroom dancing. This original 1984 NIDA production was a critical success and, after graduating, Luhrmann was invited to re-stage the play for the Czechoslovakian Youth Drama Festival in Bratislava in 1986. He invited his school friend Craig Pearce to help him rewrite and expand the script. With its themes of artistic repression and underdogs battling against the odds, the play was a success at the festival, winning both the best director and best production awards.

The film was released on DVD on March 19, 2002 by Buena Vista Home Entertainment.

Strictly Ballroom holds a rating of 95% on Rotten Tomatoes based on 40 reviews.

Main article: Strictly Ballroom (musical) In May 2011, it was announced that Strictly Ballroom would be adapted into a stage musical and premiere at the Sydney Lyric theatre. It premiered on 12 April 2014. The production moved to Her Majesty's Theatre, Melbourne in January 2015, and the Lyric Theatre, QPAC in Brisbane in September 2015.

The show received its British premiere on 30 November 2016 at the West Yorkshire Playhouse in Leeds. The show had its North American premier in Toronto at the Princess of Wales Theatre on 25 April 2017.

In popular culture The film has become a staple of pop culture, being referenced in various media worldwide.

Many television series have episodes with titles referencing the film, including Phenom ("Strictly Lunchroom"), Even Stevens, The Suite Life of Zack and Cody ("Loosely Ballroom") and Groove High ("Slightly Ballroom"). The Racket Girls episode of Mystery Science Theater 3000 features Tom Servo referring to the movie at hand as "Strictly Ballroom II". In the fifth episode of Netflix's teen drama 13 Reasons Why, Australian-born actress Katherine Langford briefly drops her American accent to quote Strictly Ballroom. The film is frequently referenced on the American iteration of "Dancing with the Stars".

You can also search for Strictly Ballroom to check for alternative titles or spellings.