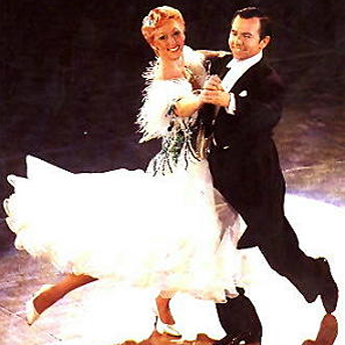 Janet Gleave started dancing when she was just a child. Her mother and father decided she ought to do something, and the norm then was children's dancing classes. She took her medal exams, joined a formation team and made lots of friends through that. Soon, a competitive career started.

Janet danced in the Latin division with partner Ray Rouse, but they didn't do that well Janet says. At the same time, Ray was dancing with Janet, he was also in the Frank and Peggy Spencer Formation Team. Janet wasn't very happy with their progress in competitions and said to Ray, "I don't think you can spend your time doing both. If you want to be successful in this, we must devote more time. You've got to choose between doing the competitions with me or the formation team." He chose the formation team, and so Janet was in search for a new partner.

Janet started dancing with Richard Gleave in 1962 or 1963 and their first Blackpool Dance Festival was in 1963 or 1964. They started as Amateurs and won the Amateur Standard Championships three times.

In 1970, the couple turned Professional. The next year in Blackpool, Richard and Janet were in the final and tied for third. It was very fast that the couple would come into such a high ranking at such a fast pace since turning Professional. A little bit of good timing and luck played a part. Some of the established Professionals retired in the early 70's which opened space in the finals.

"It was a thrill in one way and a sadness in another… that you knock over an established champion. It was a funny feeling that night."

Richard and Janet's mentors and models were Bill and Bobbie Irvine. The couple saw them competing in a competition at the Albert Hall when they were young Amateurs.
"Their style… the clear, clean, classical line and look of their dancing we liked very much and we decided we would like to do it like that. Also there was a similarity in the height relationship with me being the same height as Richard."

Another influence, Janet admired very much was Peter Eggleton and Brenda Winslade, but they had a completely different style. Len Scrivener was also a great influence on the couple, and Charles Thiebault also had a big influence on Janet as a dancer.

"They were all completely different, but they were a good mix for us. We had a pretty good team, I think!"

Janet and Richard used to practice every day, sometimes even twice a day. Back then, there used to be dance halls, and they considered themselves lucky to be able to practice to live music in those days. The big dance bands still played for general dancing to the general public and they would go into those practices.

"That was terrific because we had to dance amongst normal people. There was a dance called Dancer's Night, and they would have a demonstration by the top professionals. So we would see a show very regularly, and we learned from that. If you wanted to see a top pro dance then, you had to go and see a show. You didn't see them practicing. That whole aspect has changed. You can practice with everybody now. In those days, you couldn't."

When Richard and Janet were Champions, they did practice with others.

"We did. We were changing things. But you never saw the older Professionals practicing. They practiced in the daytime. We used to practice in the open practice sessions, and we enjoyed it. That sorts it out-dancing with other people and to live music. That was very good for us. We danced on a big floor, big like Blackpool. We practiced three times a week at that place, and then we used to have a little practice other places... sometimes we would practice at two and three o'clock in the morning. Just couldn't get it right! And we would get carried away. I enjoyed practicing most times."

Currently, Janet Gleave is one of the most sought-after Standard instructors in the world. She is also a well-known world class Adjudicator for the World Dance Council (WDC).

You can also search for Janet Gleave to check for alternative titles or spellings.