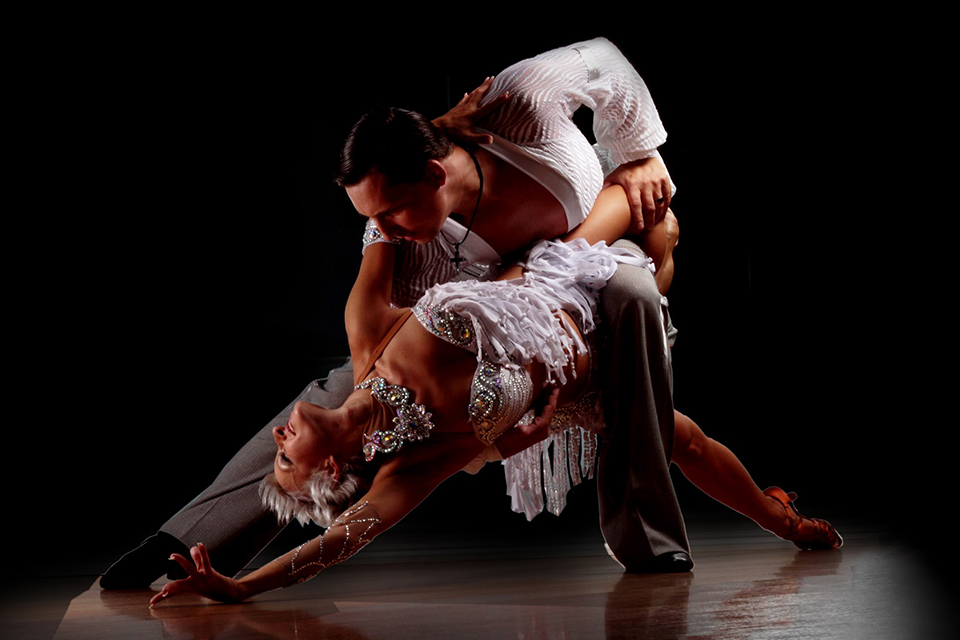 The Bolero is a genre of slow-tempo Latin music and its associated dance. There are Spanish and Cuban forms which are both significant and which have separate origins. The term is also used for some art music. In all its forms, the Bolero has been popular for over a century.
Contents [hide]

There is also the concept of ‘drop and drift’ used on forward and back breaks, left-turning slip pivots and extended movements such as larger side steps. The Bolero frame is wider than a typical Rhythm frames and is a blend between the Smooth and Rhythm frame with the distance between the partners only a few inches apart or light body contact.

Bolero is a slow, beautiful, expressive dance that is somewhat of a hybrid. It combines the dance patterns of Rumba with the rise and fall action of the Waltz. It is danced to music in 4/4 time, at a tempo slower than Rumba. Bolero is the slowest of all the American Style Rhythm dances.

It can be danced by either as a solo or a couple, and has many timings depending whether you are in Spain, Cuba, Mexico, or around the world.

Bolero is often called the “Cuban Dance of Love” and is believed to have evolved from Afro-Cuban and Spanish folk dances such as the Danzón, Beguine and Fandango. Originally it was danced in its classical form, to the constant beat of drums.

In Spain, it is danced in a 3/4 time. In Cuba, either 2/4 or 4/4 time, at a tempo slower than Rumba. The American version is built off of this Cuban theme.

Danzón is the freer more spontaneous version of "Danza" which came to Cuba in the 18th century as “Contradanza” from Spain which came from “Contredanse” at the French Court in the 17th century. It has the typical instruments of Chamber music – violins, etc., with the addition of African drums. Danzón was danced by wealthy Cuban society where very small steps are taken, the women producing a subtle tilting of the hips by bending and straightening the knees.

First sung in Creole French, the Beguine developed as Ballroom music on the islands of Guadeloupe and Martinique. The Martinique Beguine dance is a slow close dance with a roll of the hips. The most famous interpretation of it was in 1938 with Artie Shaw’s rendition of Cole Porter’s “Begin the Beguine.”

The credit of this dance goes to Sebastiano Carezo, in Spain, around 1780. Dancer Sebastiano Carezo is credited for inventing Spanish Bolero in 1780. Danced in 3/4 time, as a modification of the Fandango with the gracefulness retained and the objectionable parts omitted. Cuban Bolero originated in Santiago de Cuba in the mid-19th century, but is quite different from the Spanish version. After being in Cuba for some time, the dance traveled to Mexico and other areas in Latin America, and from there, the world.

The Bolero is a 3/4 dance that originated in Spain in the late 18th century, a combination of the Contradanza and the Sevillana. Dancer Sebastiano Carezo is credited with inventing the dance in 1780. It is danced by either a soloist or a couple. It is a moderately slow tempo dance and is performed to music which is sung and accompanied by castanets and guitars with lyrics of five to seven syllables in each of four lines per verse. It is in triple time and usually has a triplet on the second beat of each bar.

In Cuba, the Bolero was perhaps the first great Cuban musical and vocal synthesis to win universal recognition. In 2/4 time, this dance music spread to other countries, leaving behind what Ed Morales has called the "most popular lyric tradition in Latin America".

Pepe Sanchez is known as the father of the Trova style and the creator of the Cuban Bolero. Untrained, but with remarkable natural talent, he composed numbers in his head and never wrote them down. As a result, most of these numbers are now lost, but two dozen or so survive because friends and students wrote them down. He was the model and teacher for the great Trovadores who followed.

The Cuban Bolero has traveled to Puerto Rico and the rest of Latin America after its conception, where it became part of their repertoires. Some of the Bolero's leading composers have come from nearby countries, as in the case of the prolific Puerto Rican composer Rafael Hernández and the Mexican Agustín Lara. Some Cuban composers of the Bolero are primarily considered Trovadores. Boleros saw a resurgence in popularity during the 1990's when Mexican singer Luis Miguel was credited for reviving interest in the Bolero genre following the release "Romance".

José Loyola comments that the frequent fusions of the Bolero with other Cuban rhythms is one of the reasons it has been so fertile for such a long period of time:

This adaptability was largely achieved by dispensing with limitations in format or instrumentation, and by an increase in syncopation (so producing a more afrocuban sound).

The lyrics of the Bolero can be found throughout popular music, especially Latin dance music.

Fandango is a style of Folk and Flamenco music and dance. It arose as a dance of courtship in Andalusia in southern Spain early in the 18th century. Originally, the Fandango was always danced by only two persons who never touched each other with the body or the hand, only facing each other. This courtship dance is one of “The Chase,” basically boy sees girl, girl snubs boy, girl chases boy, and then runs away. The Fandango has been portrayed in many ballets as well. By the 19th century, the Fandango was replaced by the Jota, Sevillana and Bolero.

Cuban Bolero was derived from the old Spanish Bolero. The term “Bolero” stems from the Spanish verb “Volar” meaning “to fly,” exemplified in the elegant moves of the dancers. Cuban composer Pepe Sanchez composed the first known Cuban Bolero, entitled Tristeza (“Sadness”) in 1883. Cuban Bolero is a different dance than Spanish Bolero as the music and rhythms were changed by Cubans from 3/4 to 2/4 and then 4/4 time and is danced closer to a Rumba style. By the early 1900's, the immensely popular Bolero reached Mexico and Latin America, eventually gaining recognition in North America by the late 1920's.

The American Bolero was made popular in the United States when French composer Maurice Ravel wrote his composition in 1928. Contemporary Boleros are a ballad style with slow tempos and sentimental lyrics usually with Spanish vocals and soft percussion.

A version of the Cuban Bolero is danced throughout the International Latin Dance world (supervised by the World Dance Council) under the misnomer Rumba. This came about in the early 1930's when a simple overall term was needed to market Cuban music to audiences unfamiliar with the various Cuban musical terms. The famous Peanut Vendor was so labelled, and the label stuck for other types of Cuban music.

In Cuba, the Bolero is usually written in 2/4 time, elsewhere often 4/4. The tempo for the dance is about 120 beats per minute. The music has a gentle Cuban rhythm related to a slow Son Cubano, which is the reason it may be best described as a Bolero-Son. Like some other Cuban dances, there are three steps to four beats, with the first step of a figure on the second beat, not the first. The slow (over the two beats four and one) is executed with a hip movement over the standing foot, with no foot-flick.

The dance known as Bolero is one of the five competition dances in the American Rhythm Ballroom dance category. The first step is typically taken on the first beat, held during the second beat with two more steps falling on beats three and four (cued as "slow-quick-quick"). In competitive dance the music is in 4/4 time and will range between 96 to 104 bpm. This dance is quite different from the other American Rhythm dances in that it not only requires Cuban motion, but also rises and falls such as found in Waltz and contra-body movement. Popular music for this dance style need not be Latin in origin. Lists of music used in competitions for American Rhythm Bolero are available. 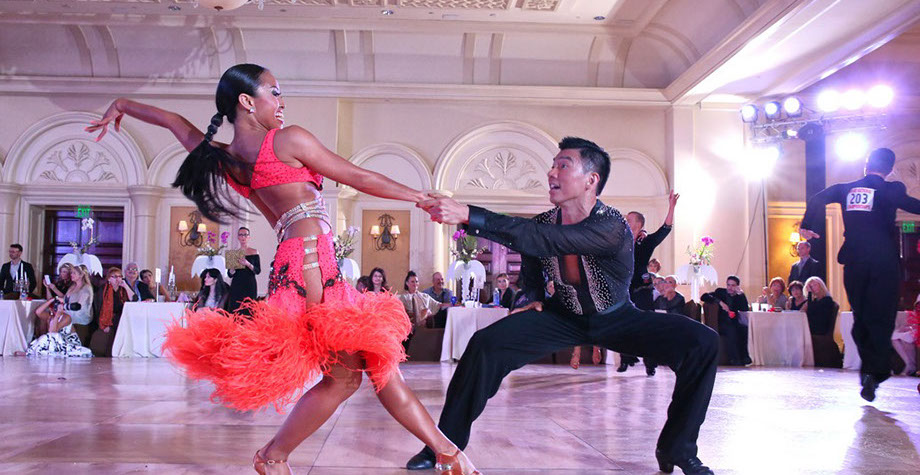 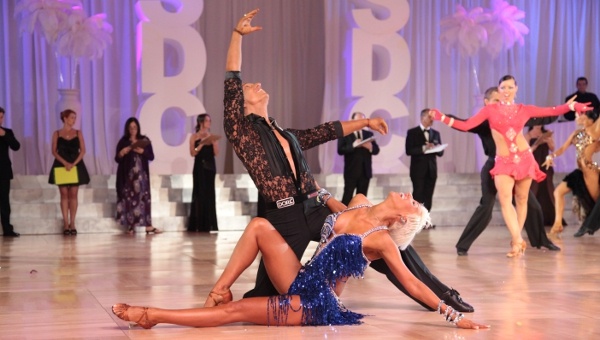 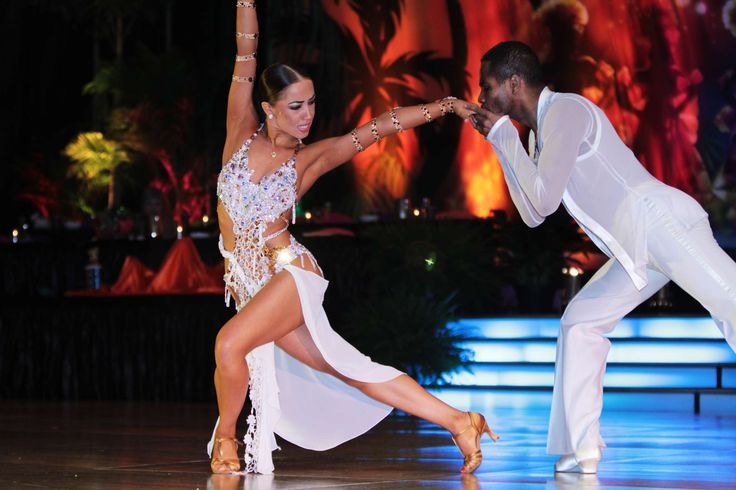 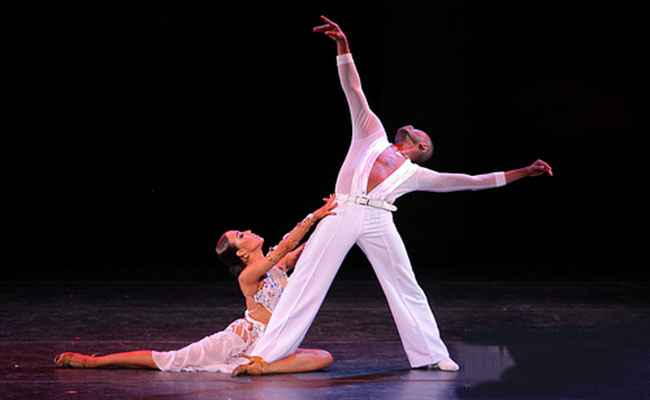 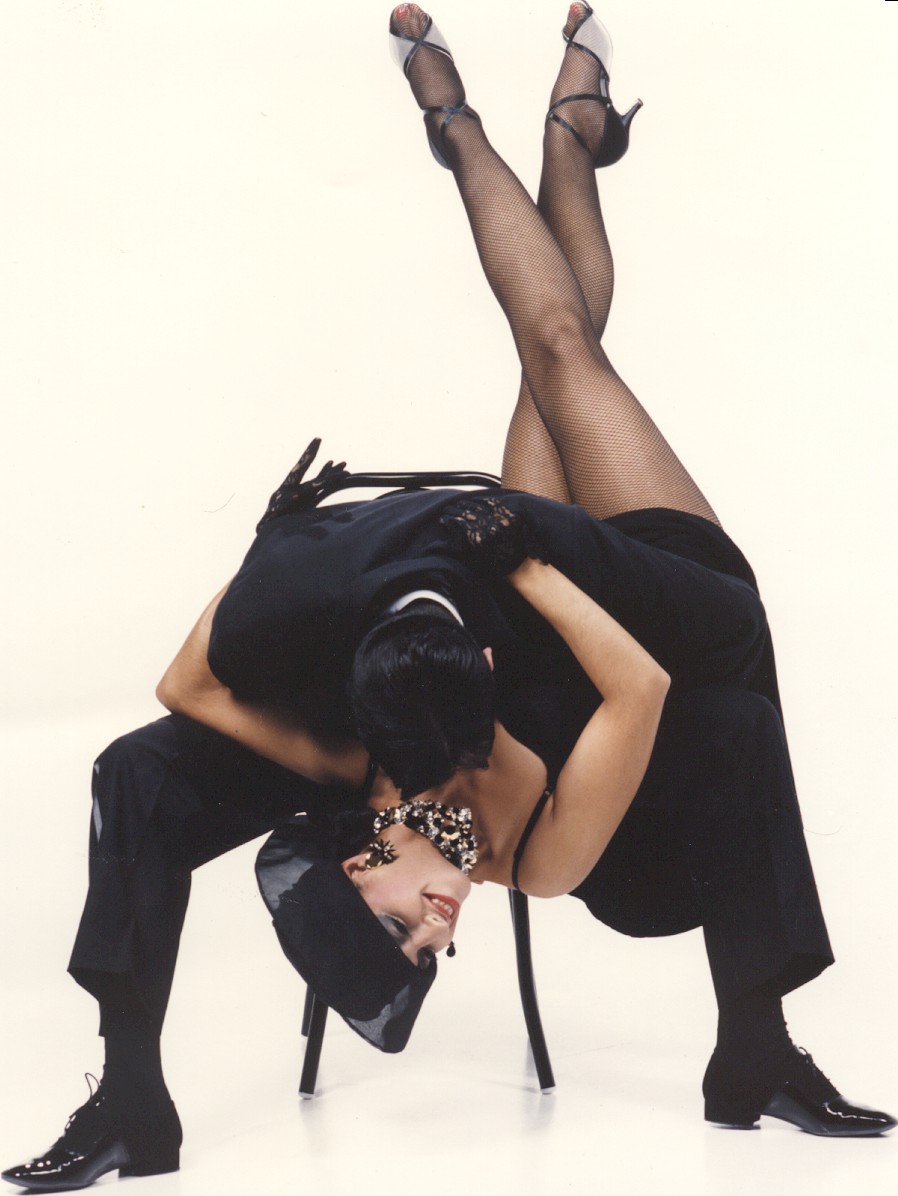 You can also search for Bolero to check for alternative titles or spellings.