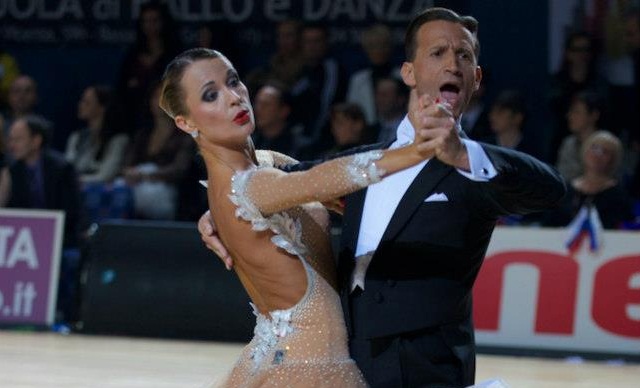 Tango is a Ballroom Dance that branched away from its original Argentine roots by allowing European, American, Hollywood, and competitive influences into the style and execution of the dance.
Contents [hide]

Tango is earthy and dramatic. Although walking movements dominate, Tango walks, having a "stalking" or "sneaking" character, are unlike the walks of other Ballroom dances. Movements are sometimes slow and slithery, and other times sharp and stacatto, such as a quick foot flick or a sharp head snap to promenade position. Tango has the same counter clockwise flow of movement around the dance floor, but with a lesser sense of urgency in comparison to the smoother and more continuous Ballroom dances.

In the late 19th century, Buenos Aires was filled with immigrants and transients from Europe and Africa, many of whom found themselves lonely and looking for companionship in their new foreign habitat. Naturally, these forlorn people found their way to the saloon, seeking drinks to drown their sorrows, temporary friendship, and any entertainment to help distract their depressed feelings. The variety of cultures combined to bring about a new style of music, formed from African beats, Indian rhythms, Latin influences, and the popular music of the pampas (flatlands) in Argentina.

As you may guess, this new music was dubbed Tango. Historians argue the name comes from the African candombe drum beat known as "tan-go", or possibly from the Latin word "tangere" (to touch). The dance began as a pantomime of communication between prostitute and pimp. The improvisation was filled with emotional outpouring and suggestive gyration. This sexual choreography was accented by the melancholy drone of the bandoneon, a German instrument very similar to the accordion.

These crude beginnings developed into less obscene styles that symbolized the lower class of Argentina through the turn of the century. Throughout the Tango`s evolution, two things remained constant: the background music of the bandoneon, and the passionate translation of emotions into dance.

In the early 1900's, a less vulgar form of tango was exported to France, where it was further refined and quickly gained popularity with the Parisian high society. Adding classy clothes, ballrooms, lyrics, and an orchestra, the Tango was revolutionized for the rich and became popular all over Europe, the USA, and was even embraced by the upper class of Argentina

The present day Ballroom Tango is divided into two disciplines: American Style Tango and International Style Tango. Both styles are enjoyed as Social and competitive dances, but the International version is more globally accepted as a competitive style. Both styles share a closed dance position, but the American Style allows its practitioners to separate from closed position to execute open moves, like underarm turns, alternate hand holds, dancing apart, and side-by-side choreography.

In 1912, Tango was introduced to the British audiences, showcased in the successful musical comedy "The Sunshine Girl". Concurrently, the dance became popular elsewhere in Europe, particularly in Paris and Europeans began to inject their own culture, style and technique into the dance.

In an effort to teach a standardized version of the Tango, the English eventually codified their own version of Tango for instruction in dance schools and for performance in competitions in 1922. The resulting style was referred to as English style, but eventually took on the name International Style, as this became the competitive Ballroom version practiced around the world.

Eventually, championships in the International Style Tango were organized all over Europe with numerous participating countries. Adjudicators were able to judge against a standardized syllabus and book of techniques, thereby creating a more objective means of picking the champions, even though artistic interpretation remains an important element of competition to this day.

Initially, the English dominated the International Style Tango, but eventually, technicians from other backgrounds, most notably the Italians, have chipped away at the English standard and created a dynamic style that continues to raise the competitive bar.

As they did with many other dances, the Europeans (most notably the English) adopted the Tango and made it their own. A very powerful dance was the result, with big movements, dramatic gestures, and quick snaps of the head from one position to another. Grouped together in competitive events with the Smooth Ballroom dances, the International Tango incorporated many of the pattern characteristics of Waltz and Foxtrot, but it still maintains a very unique character which sets it apart from all of the other ballroom dances.

The American Style Tango's evolutionary path is derived from Argentina to the United States, when it was popularized by silent film star Rudolph Valentino in 1921, who demonstrated a highly stylized form of Argentine Tango in "The Four Horsemen of the Apocalypse". As a result, the Hollywood-style steps mixed in with other Social Dancing steps of the time and began this branch away from the Argentine style. Meanwhile, the Tango was also making its own inroads into Europe.

Following the English standardization of their version of Tango, Arthur Murray, a Ballroom Dance instructor in the U.S., tried his own hand at standardizing the Ballroom Dance for instruction in his chain of social dance schools. This looser social style was referred to as American Style by the English.

A simplified version of the Tango, Arthur Murray's American style was intended for mass consumption. Although criticized by Tango enthusiasts for its lack of authenticity and charter, it was this version that introduced many Americans to the world of Ballroom dancing. Before long, the American Style Tango was being influenced by famous dancers of the stage and screen. It was this influence which contributed the most to its flamboyant and theatrical character.

The American Style Tango continues to evolve. Among those influences, the technical International (English) style Tango, the dramatic Paso Doble, and even the original Argentine style continue to contribute to its evolution. However, the American version is still best known as both the simplest and the showiest of all Tangos. This style of Tango, especially at highly-developed skill levels, makes great use of open and alternate dance positions to further showcase Tango's dramatic nature.

Footwork: In Tango, the feet pick up and place onto the floor, rather than gliding along in constant contact with the floor. The foot action is highly articulated, often being compared to the sneaking or stalking action of a cat. Forward walks are placed with the heel first, then flat. Backward walks are taken with a toe first, with the heel lowering as the body moves over it. At the same time, the toe of the forward foot should release from the floor as the body moves away. Side steps and chasses normally use a whole foot or ball-flat action.

Rise & Fall: There is no rise & fall action in Tango. The body level should remain constant throughout.

Tango uses a modified dance hold, more compact than the normal closed position Ballroom hold. The man and lady stand slightly farther offset, causing the man's right arm to be positioned farther around the lady's back so that the fingers of his right hand lay across her spine. Instead of placing her left arm on top of his, she will hook her forearm underneath his elbow and upper arm. Her wrist will be positioned directly underneath his arm (possibly, but not necessarily in contact) with palm facing inward, her fingers just reaching his torso. The lady's right hand and man's left hand are joined in an upper-hand clasp at approximately the lady's eye level. The man's left and lady's right elbow may be held slightly higher than normal, with a more acute angle at the elbow.

Tango music comes from a mixture of cultural influences including African, Indian, French, Spanish, and Latin American. Modern Tango music comes in two distinct flavors: the melodic Argentinian style, and the rhythmical European style. At the heart of the Argentinian style is the bandoneon, which is often accompanied by a small band, including a piano, guitar, one or two violins, and sometimes a singer. True Argentine Tango music never has a heavy drum beat, if drums are used at all. The European style, in contrast, is a strong march with a steady, consistent downbeat played by a snare drum. The music is often played by a large orchestra with or without the bandoneon.

American style Tango is danced to music of either variety, sometimes to something in between. It may be written in 2/4 or 4/4 time, but to the dancer it usually feels as though beats occur in groups of 8. The tempo is medium; 120 - 128 beats per minute (30-32 mpm at 4/4) is recommended for competitions and examinations at all levels. Because of the way most of the syllabus figures are configured, the best music for Bronze Syllabus Level and social dancing should have steady, predictable two-measure (8-beat) phrases with a strong cadence. 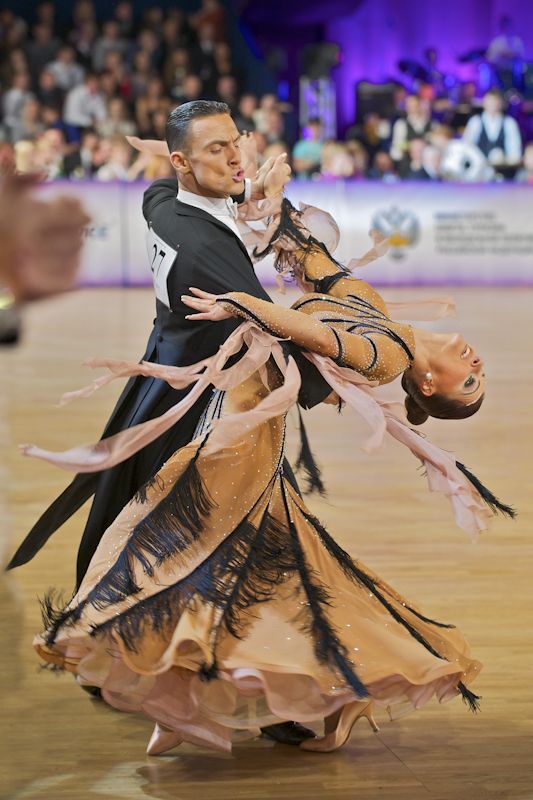 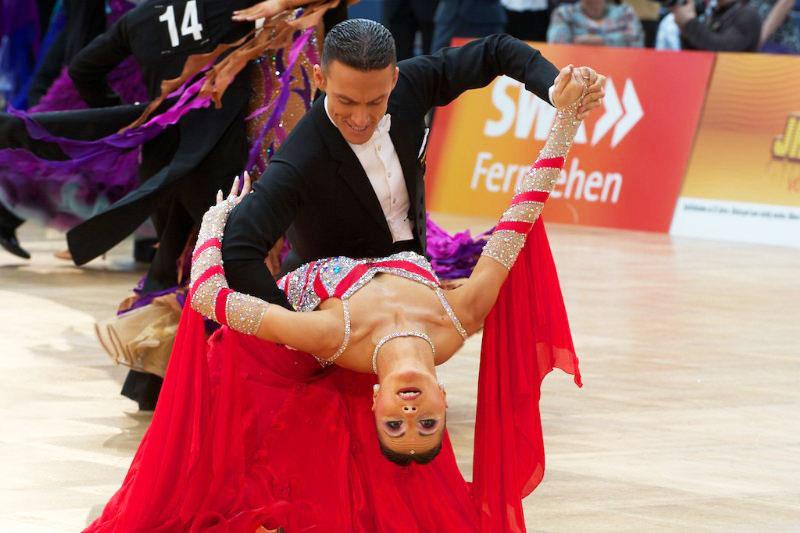 You can also search for Tango to check for alternative titles or spellings.